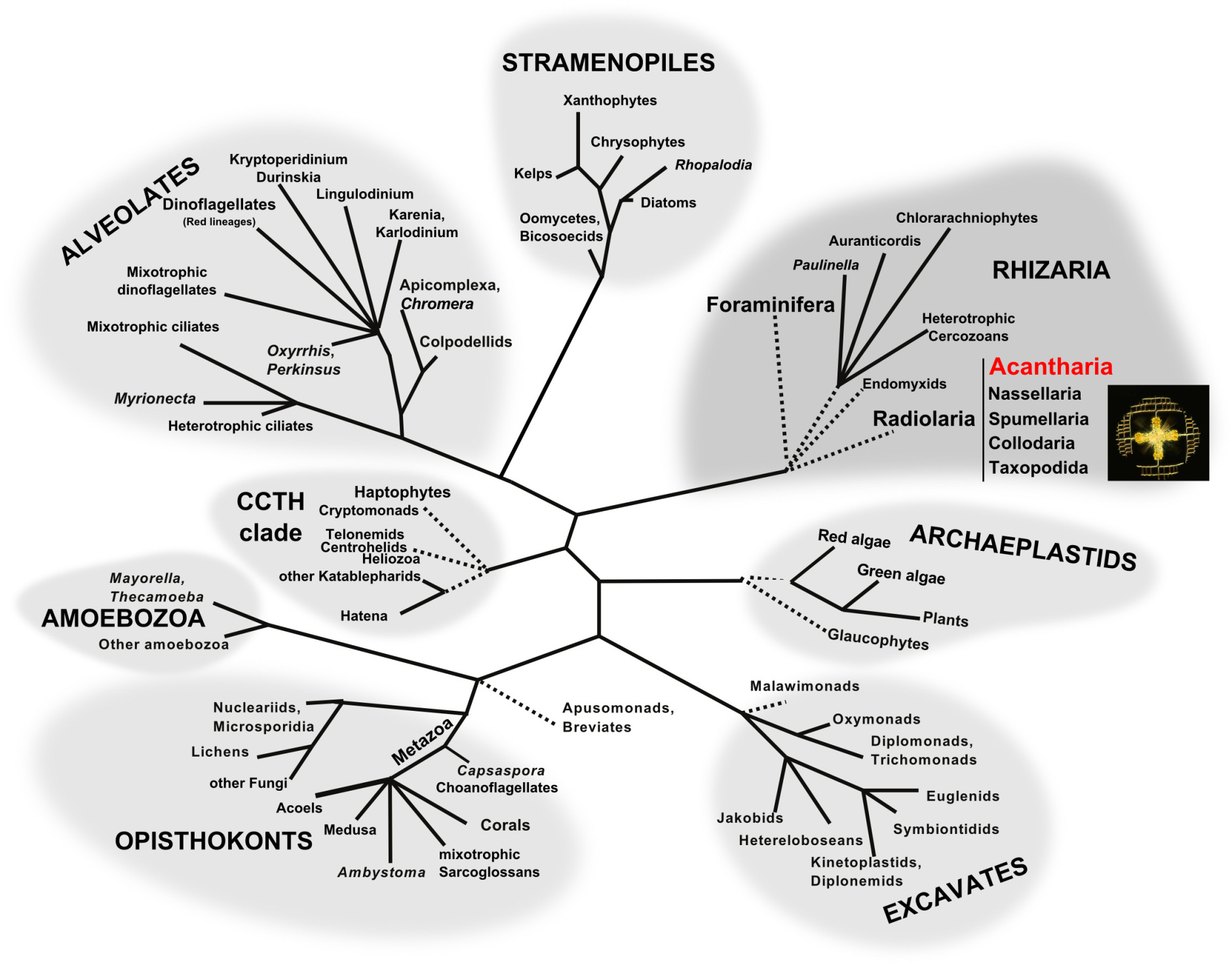 Tree of eukaryotes showing the supergroups. Acantharia belong to Radiolaria in the supergroup Rhizaria (modified from Dorrell and Howe, 2012).

Acantharia are unicellular eukaryotes that measure 20 to 800 micrometers. Their characteristic star-shaped morphology consists of a skeleton of 10 or 20 spicules made of strontium sulfate (also called celestite; Odum 1951; Suzuki and Aita, 2011). Acantharia are the only known marine organisms that are able to biomineralize specifically strontium to build complex and symmetrical structures. The role of strontium (Sr2+) remains unknown in marine ecosystems. This cation that is close to the calcium element would be involved in calcium carbonate biomineralization in gastropods, corals but also in human bones (Hanlon et al., 1989; Nielsen, 2004). The spicules of the skeleton, which are monocrystals of celestite contained within a perispicular vacuole, are arranged according to the geometric law of Müller (1859): 8 “polar” spicules, 8 “tropical” spicules and 4 “equatorial” spicules (Figure 2). But, depending on the taxonomic affiliation of the acantharian cell, the skeleton’s morphology can be very different: length and shape of the spicules can be distinct, small mineral extensions like apophyses or teeth along each spicule can be present and spicules can even form a shell-like robust structure etc. 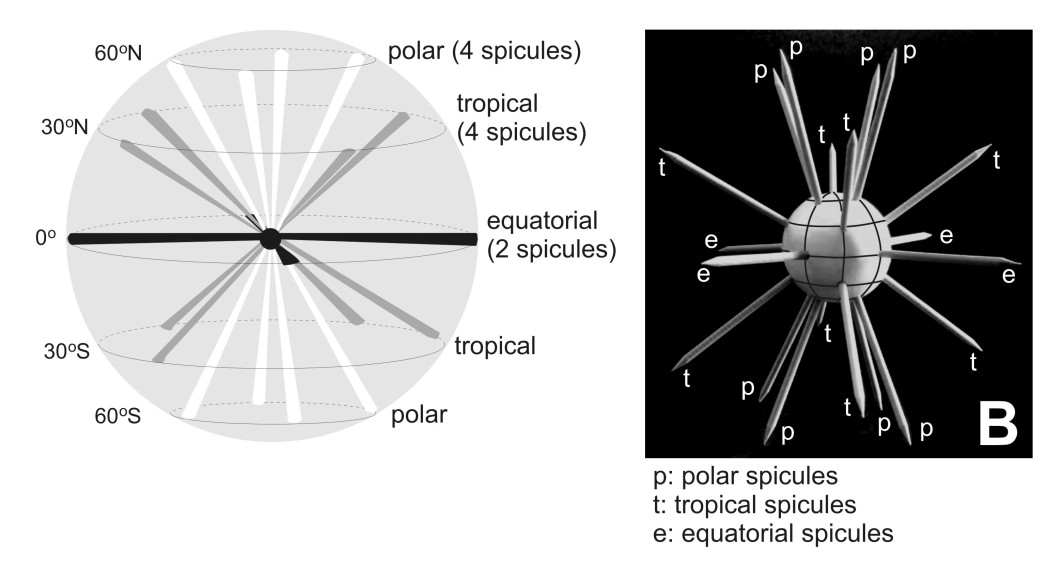 The originality and complexity of the acantharian cell drew the attention of cellular biologists in the 1970’s. The internal skeleton supports a typical rhizarian amoeboid cell, which is divided into 2 main compartments, the ectoplasm and endoplasm, delimited by the periplasmic cortex and the capsular wall, respectively (Figure 3). The ectoplasm is a cytoplasmic extension that is mainly responsible in prey capture and digestion but also for cell buoyancy. The endoplasm is the “true’ cytoplasm of the cell, containing the main organelles, such as numerous nuclei, mitochondria  and golgi apparatus (Febvre et al., 2000).  Contrary to some other Radiolaria and Foraminifera, symbiotic microalgae are hosted and remain in this endoplasm. 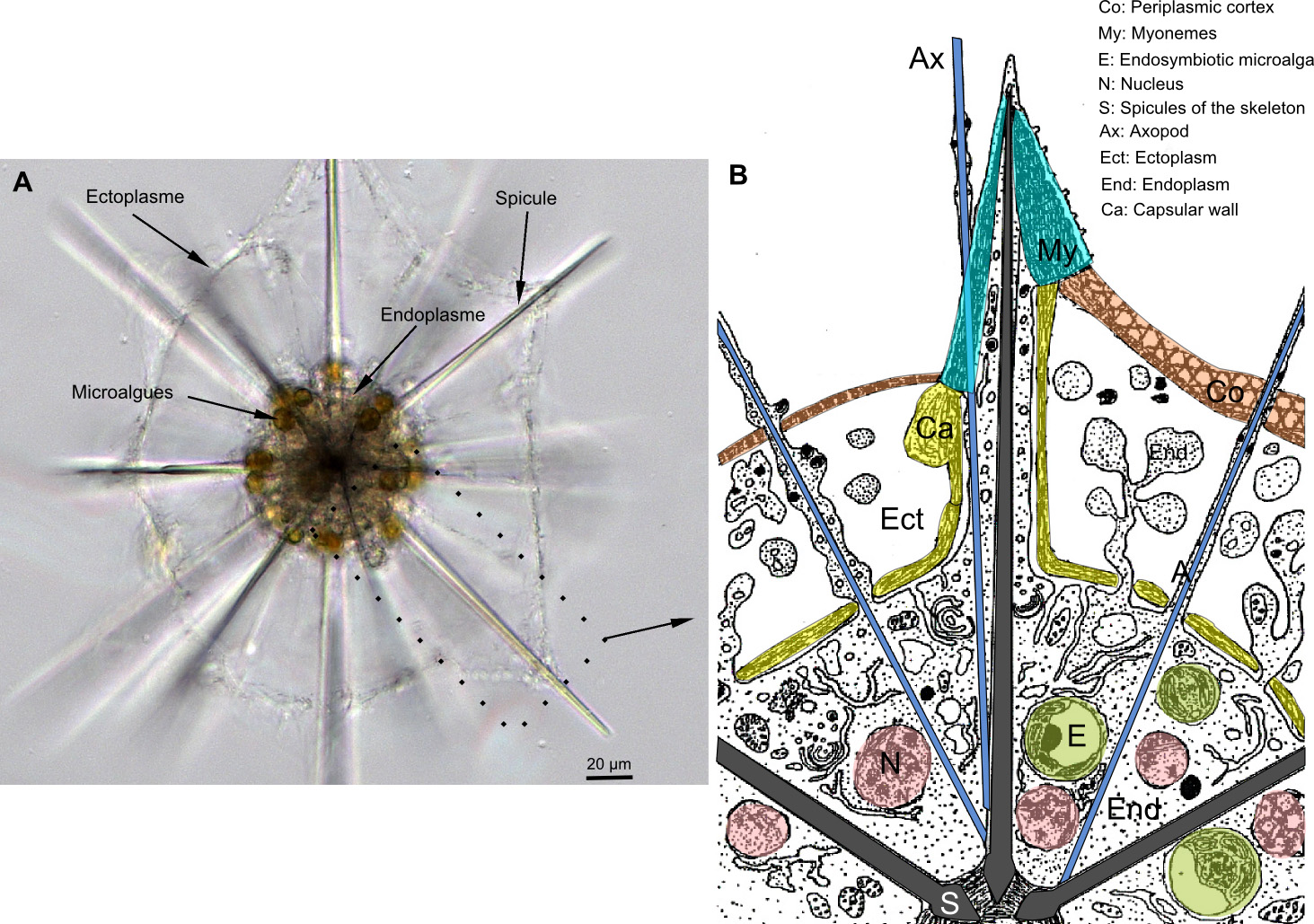 Organisation of the acantharian cell. A: picture in light microscopy. B: Scheme of the ultrastructure.

The periplasmic cortex is attached to the tips of each spicule by contractile filaments of 8-60 µm-long, called myonemes (Figure 3 and Figure 4). Depending on the taxonomy, there are between 2 and 60 myonemes on each spicule (Febvre, 1981; Febvre et al., 2000). Myonemes are like “muscles” that can rapidly relax and contract the cell, leading to variation of the cell surface. This activity that is controlled by calcium flux would allow Acantharia to modulate its buoyancy in the water column (Febvre, 1981; Febvre et Febvre-Chevalier, 1989). Acantharia also have axopods, assemblages of microtubules common in Radiolaria and Heliozoa, that are involved in prey capture and vesicule transports between different cellular compartments (Febvre-Chevalier et Febvre, 1986). 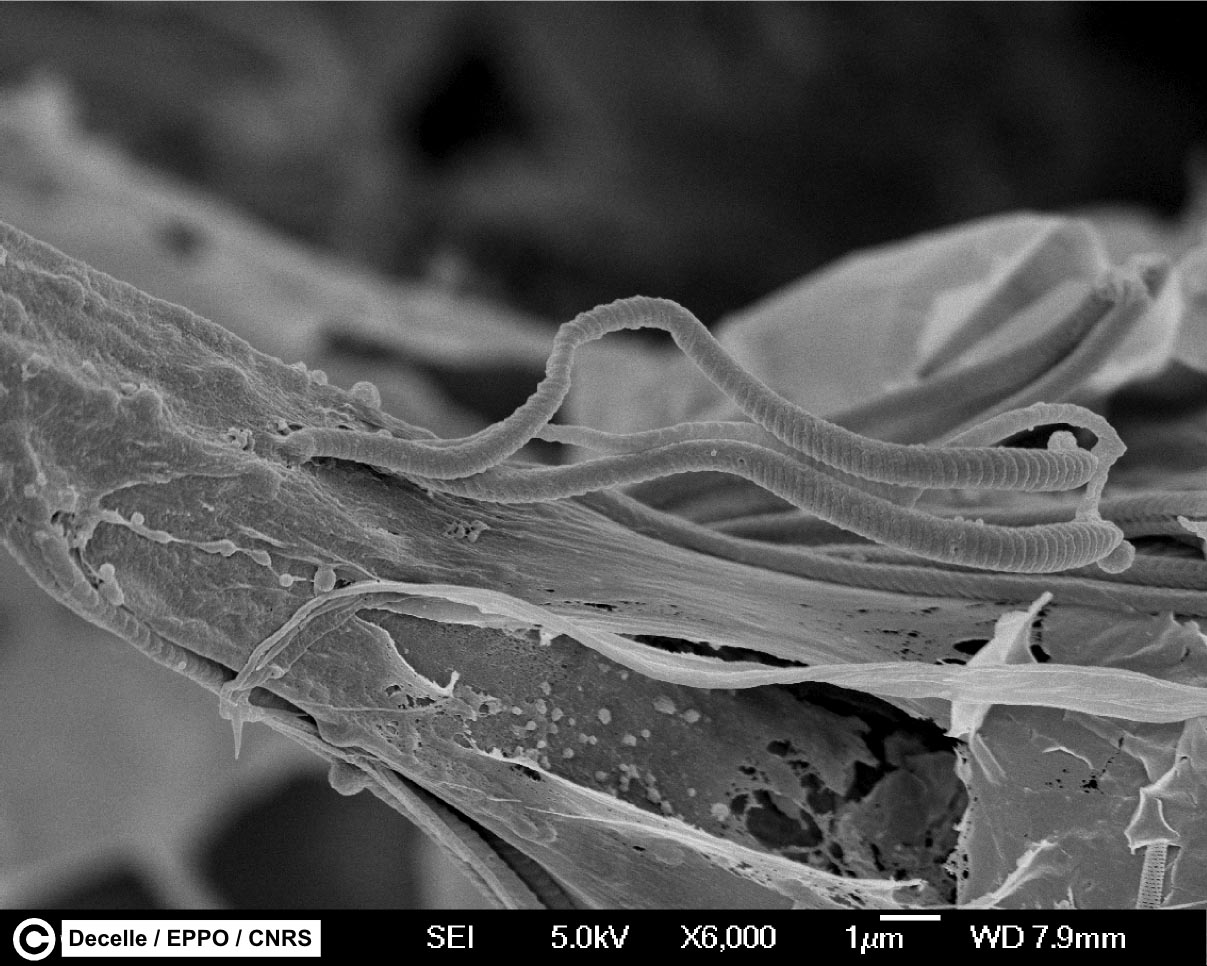 In 1858, the german biologist Johannes Müller from the University of Berlin first described Acantharia that he originally named “Acanthometren”. He was studying and teaching human physiology but became fascinated by the forms in marine plankton at the end of his carrier. He collected cells of Acantharia in the Mediterranean sea (Italy and South of France) with his own plankton net, the “Müller’s net”. During field trips to the island of Helgoland (North Sea), the professor initiated and encouraged his students like Ernst Haeckel to study marine plankton. In the wake of his professor, Ernst Haeckel worked on Acantharia and produced the first taxonomic framework in 1887 in his impressive publication “Die Radiolarien”, where he named and described 372 species. This first classification was then slightly modified by Mielck (1907) and Popofsky (1904a, b, 1906). The main diagnostic characters used for species identification were the different elements of the skeleton, such as the length, form and junction of the spicules.

In 1926, a russian Wladimir Schewiakoff from the University of St Petersburg spent his last three years of his carrier to study Acantharia at the Stazione Zoologica in Naples. Contrary to his predecessors, Schewiakoff observed and worked mainly on living cells, allowing him to define more morphological characters (myonemes, central capsule, membranes etc.), but also to investigate the ecology and physiology of the Acantharia. In his monograph published in 1926, he presented the revised taxonomy of Acantharia containing 130 species. Although few modifications have been done since this time (Trégouboff, 1953; Reshetnyak, 1981; Bernstein et al., 1999; Febvre et al., 2000), this morphology-based classification has not been revised by molecular tools. Currently, the class Acantharia comprises about 50 genera and 150 species, distributed in 18 families and 4 orders: Holacanthida, Chaunacanthida, Symphiacanthida et Arthracanthida (Figure 1). Schewiakoff considered Holacanthida and Chaunacanthida as the “primitive” forms of Acantharia. 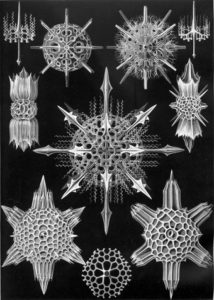 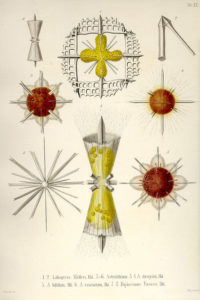 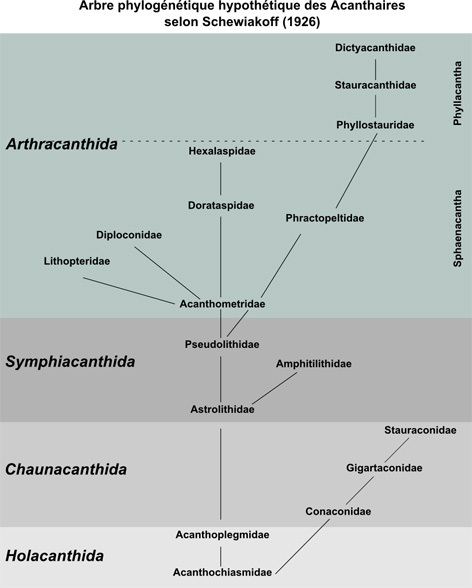 Morphological identification of delicate and uncultured protists like Acantharia is a very difficult task. Diagnostic characters are very few and their observation often requires specific preparation under the microscope. In addition, some characters can be destroyed during the sampling collection and/or change drastically through the cell ontogenesis. All this suggests that taxonomy of Acantharia may contain errors and need to be compared with a molecular phylogeny to identify the conflicts.

Contrary to other Radiolaria (Polycystinea) and Foraminifera that have a complete fossil record, Acantharia do not fossilize since their skeleton in celestite dissolves very quickly when the organism dies (Beers et Stewart, 1970). The evolution of Acantharia therefore remains enigmatic. Inferring a molecular phylogeny can be a promising approach to reveal the evolutionary pathway of the Acantharia.

From single morphologically-identified acantharian cells, isolated from various oceans, we recently established the first comprehensive molecular phylogeny of Acantharia (Decelle et al 2011). Our phylogenetic analyses based on 18S rDNA and partial 28S rDNA revealed the existence of 6 main clades, sub-divided into 13 sub-clades. The polyphyletic nature of acantharian families and genera demonstrates the need for revision of the current taxonomy. This molecular phylogeny, which highlights the taxonomic relevance of specific morphological criteria, such as the presence of a shell and the organisation of the central junction, provides a robust phylogenetic framework for future taxonomic emendation. 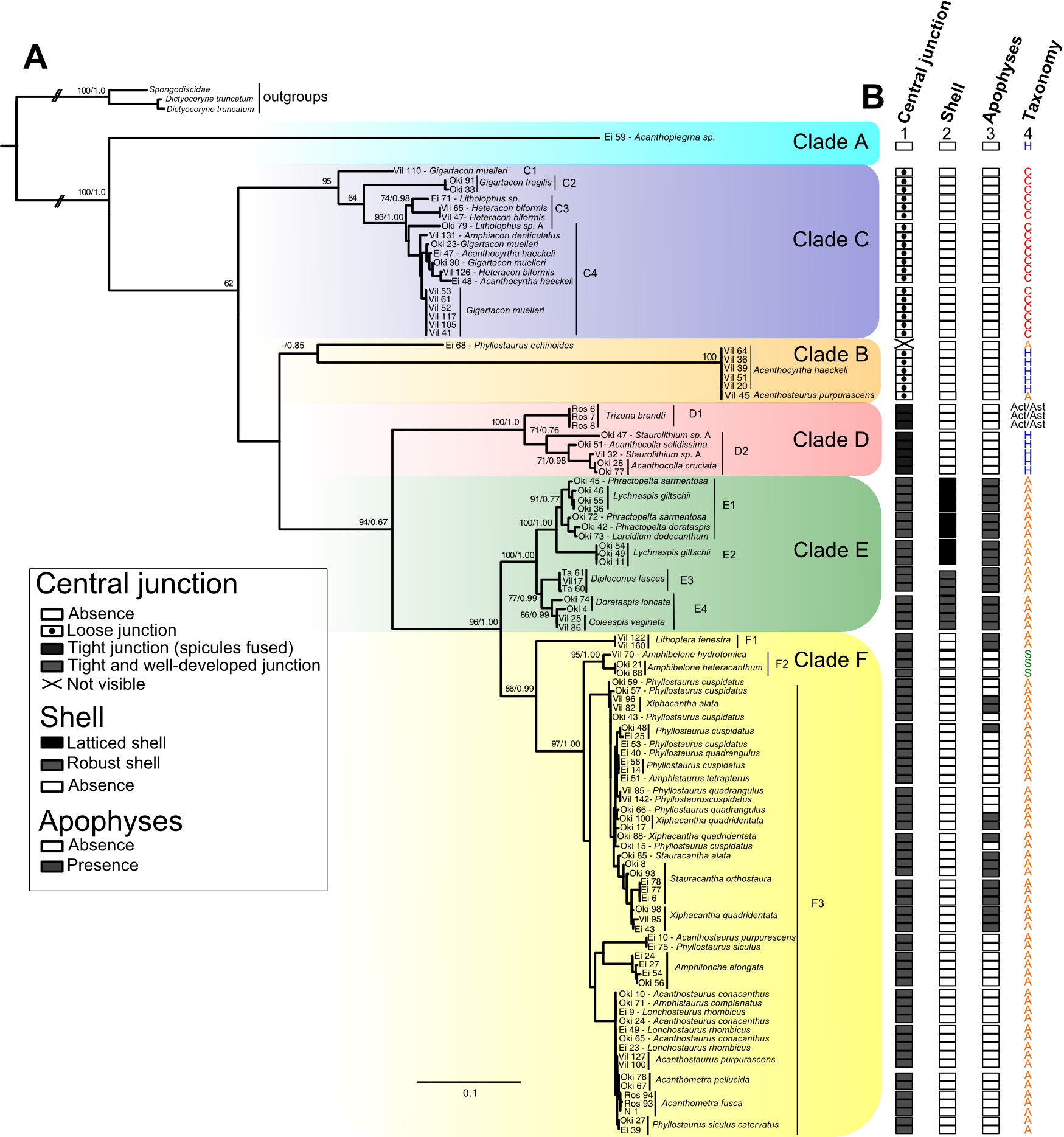 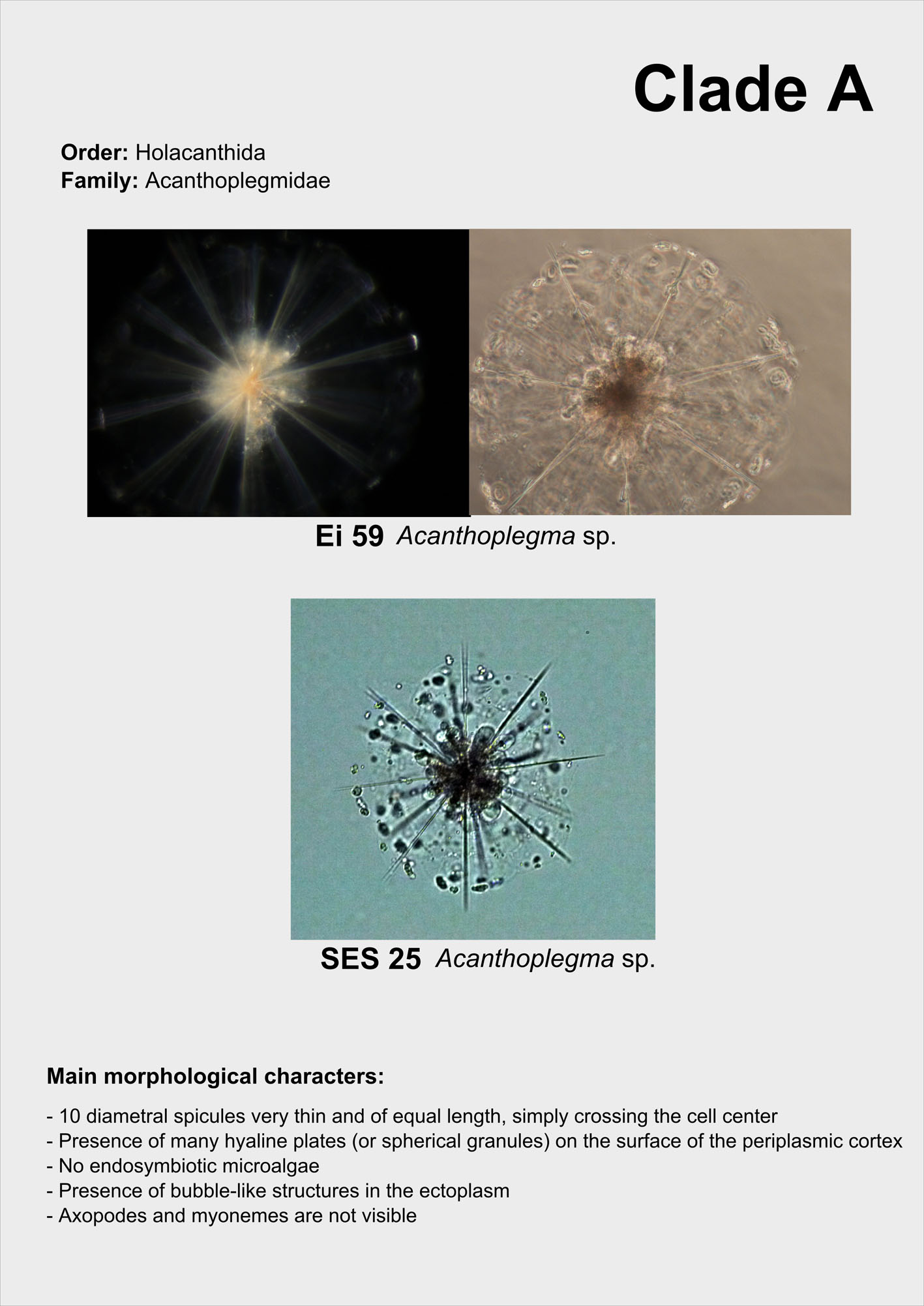 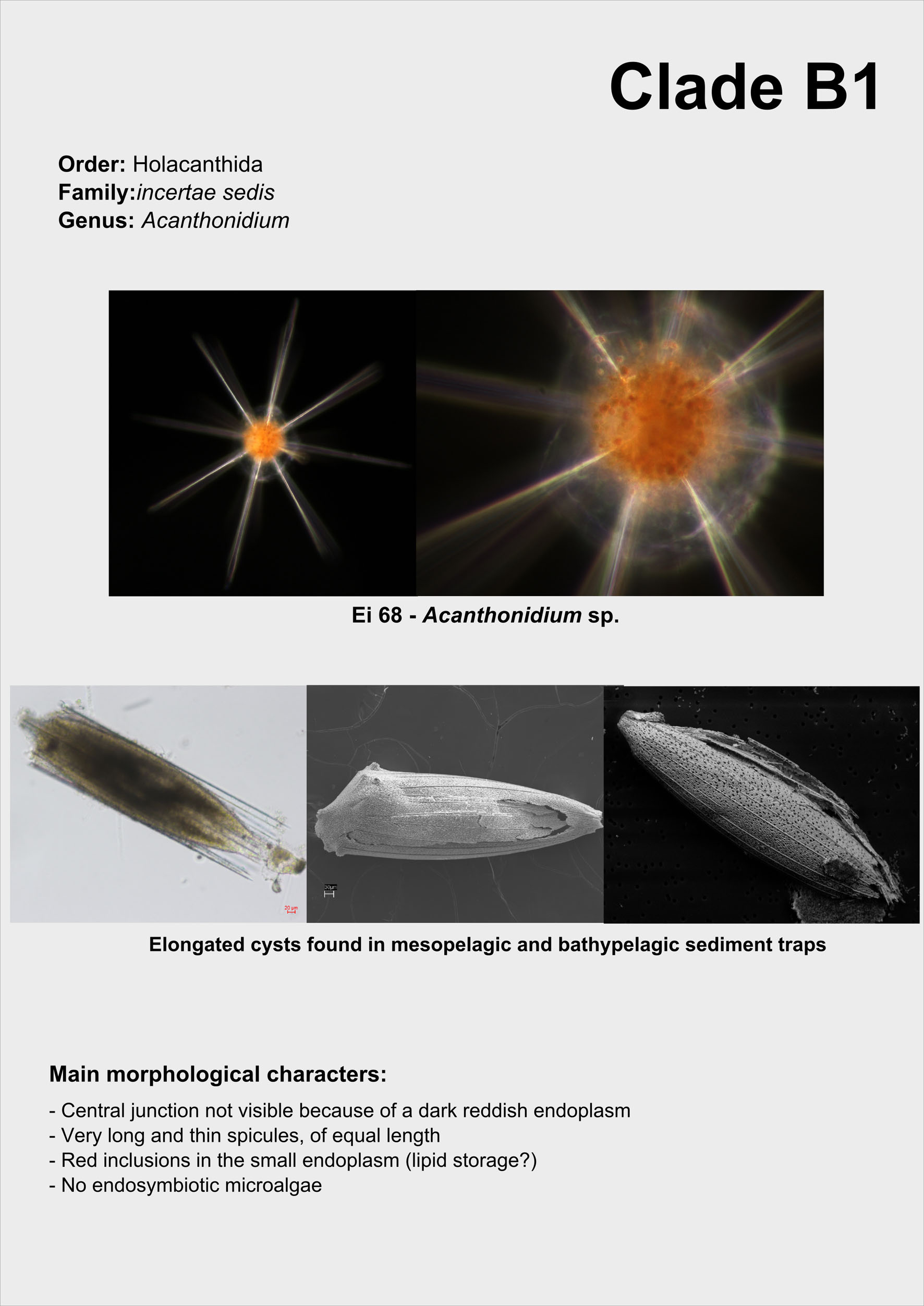 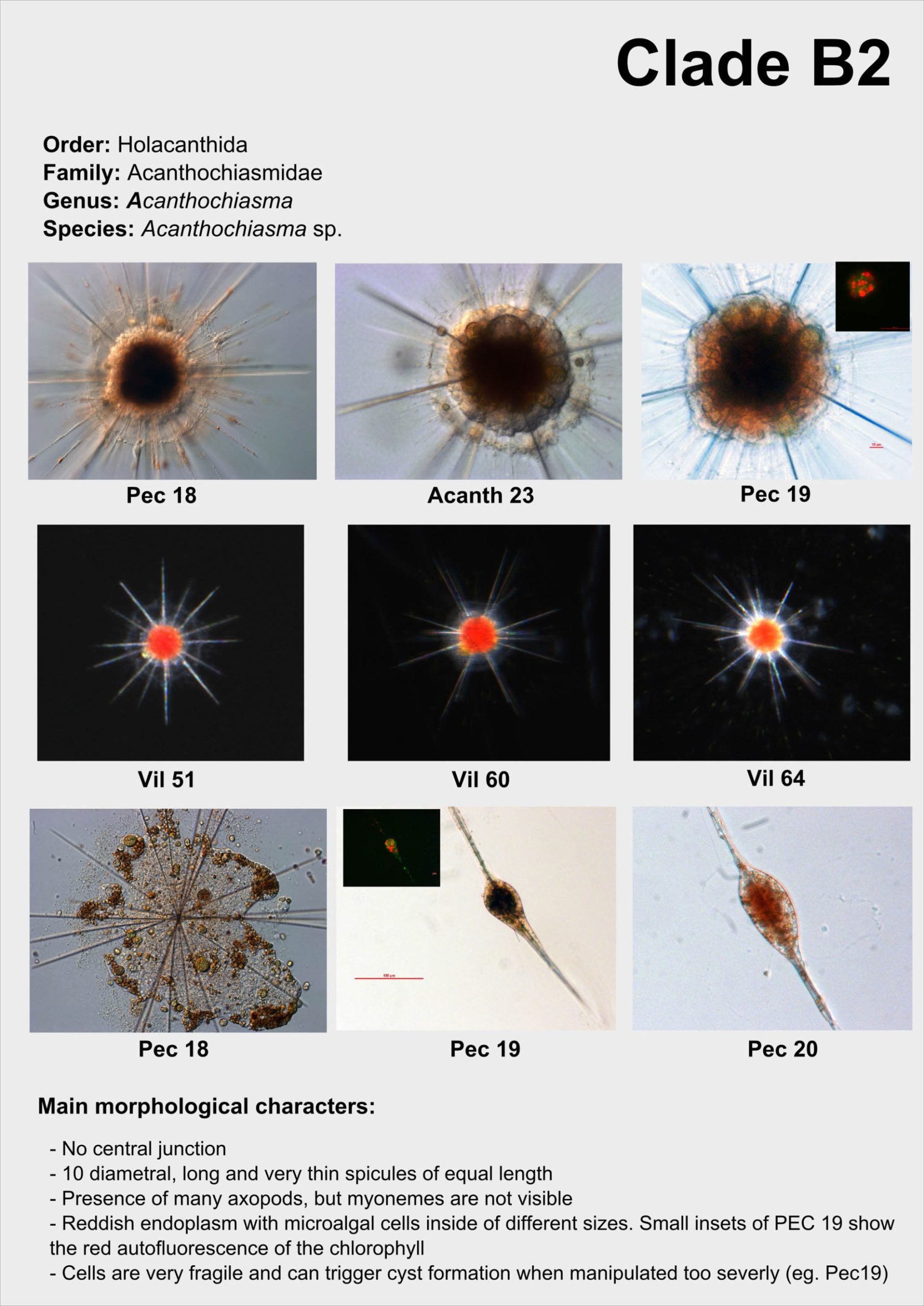 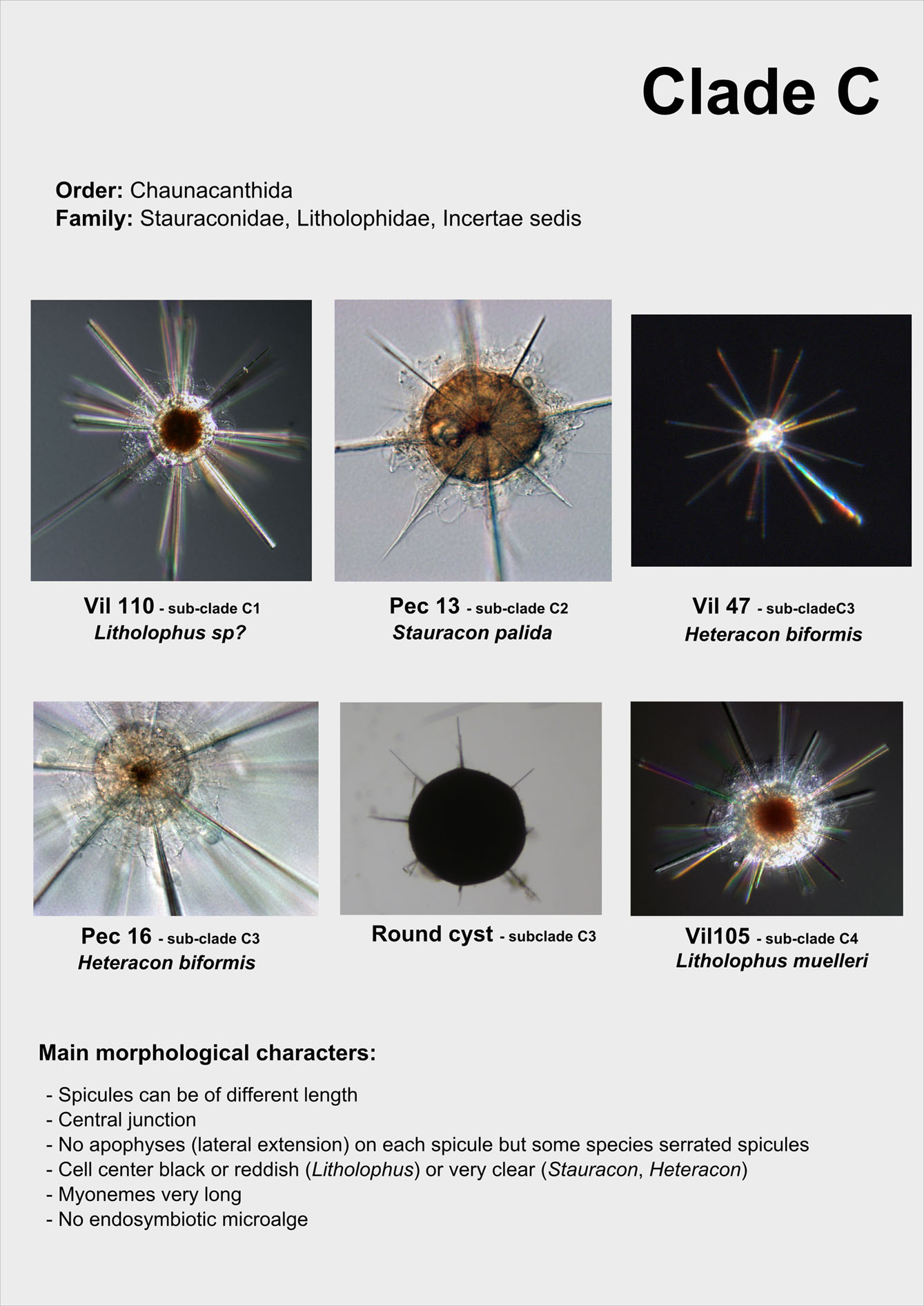 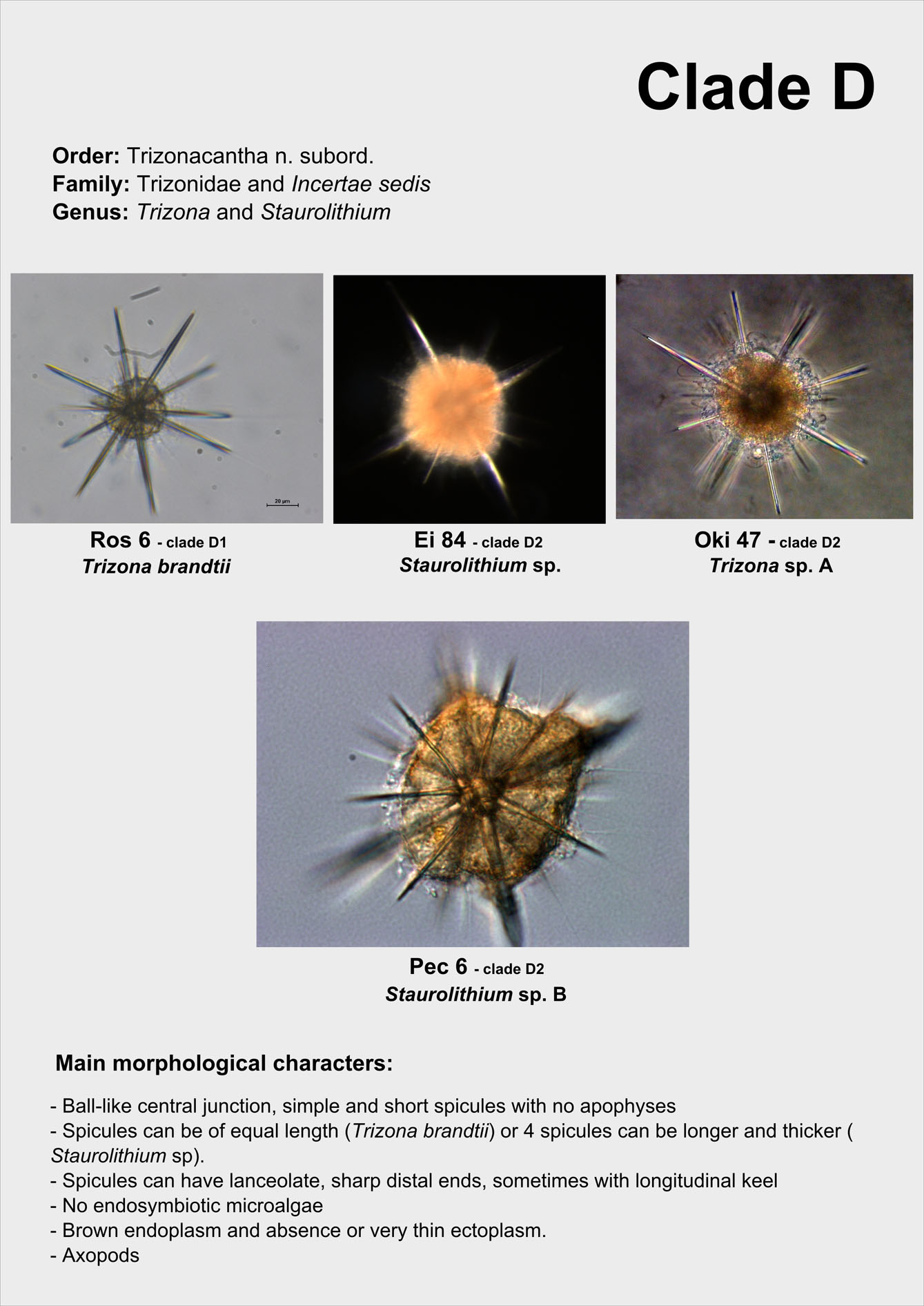 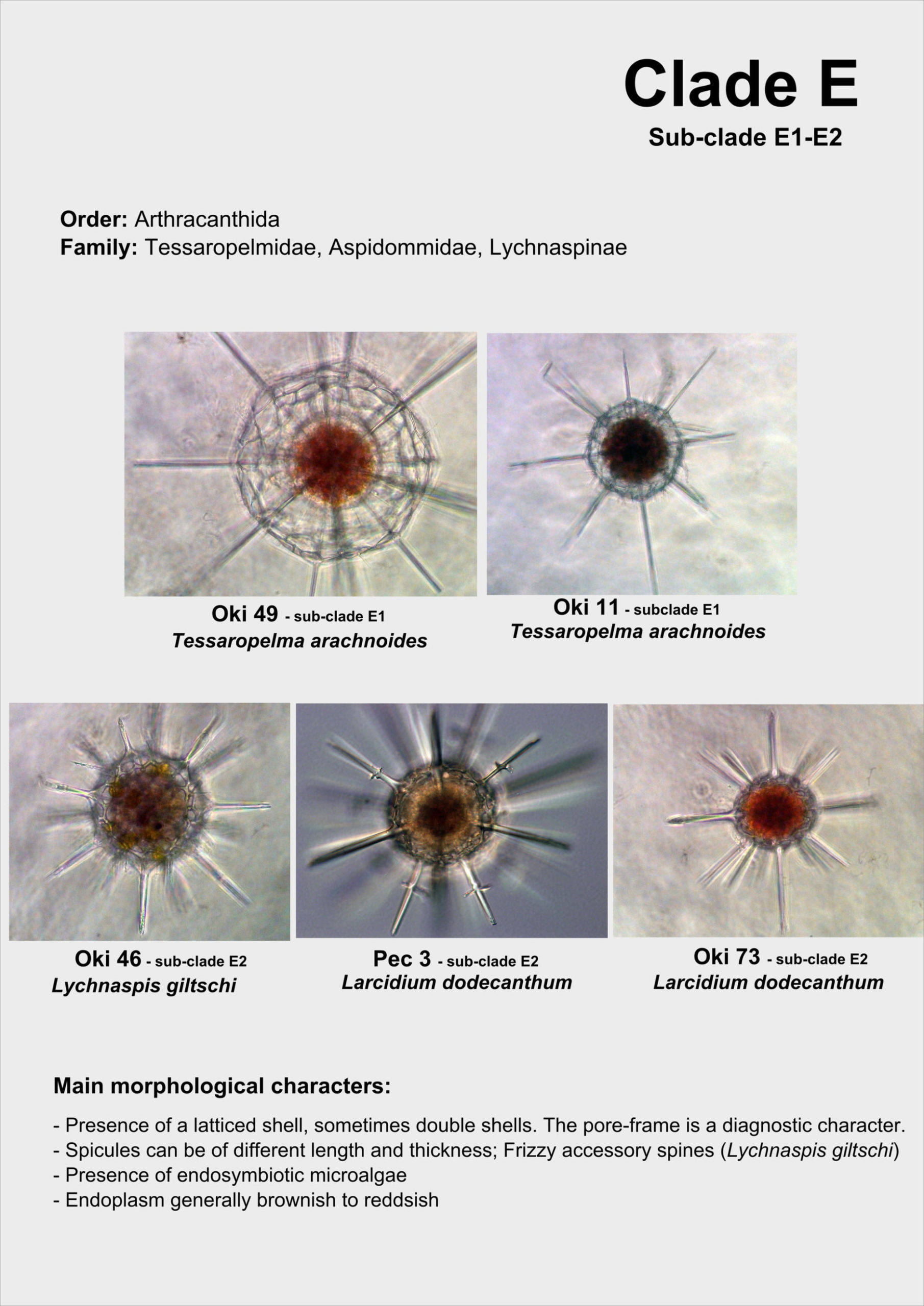 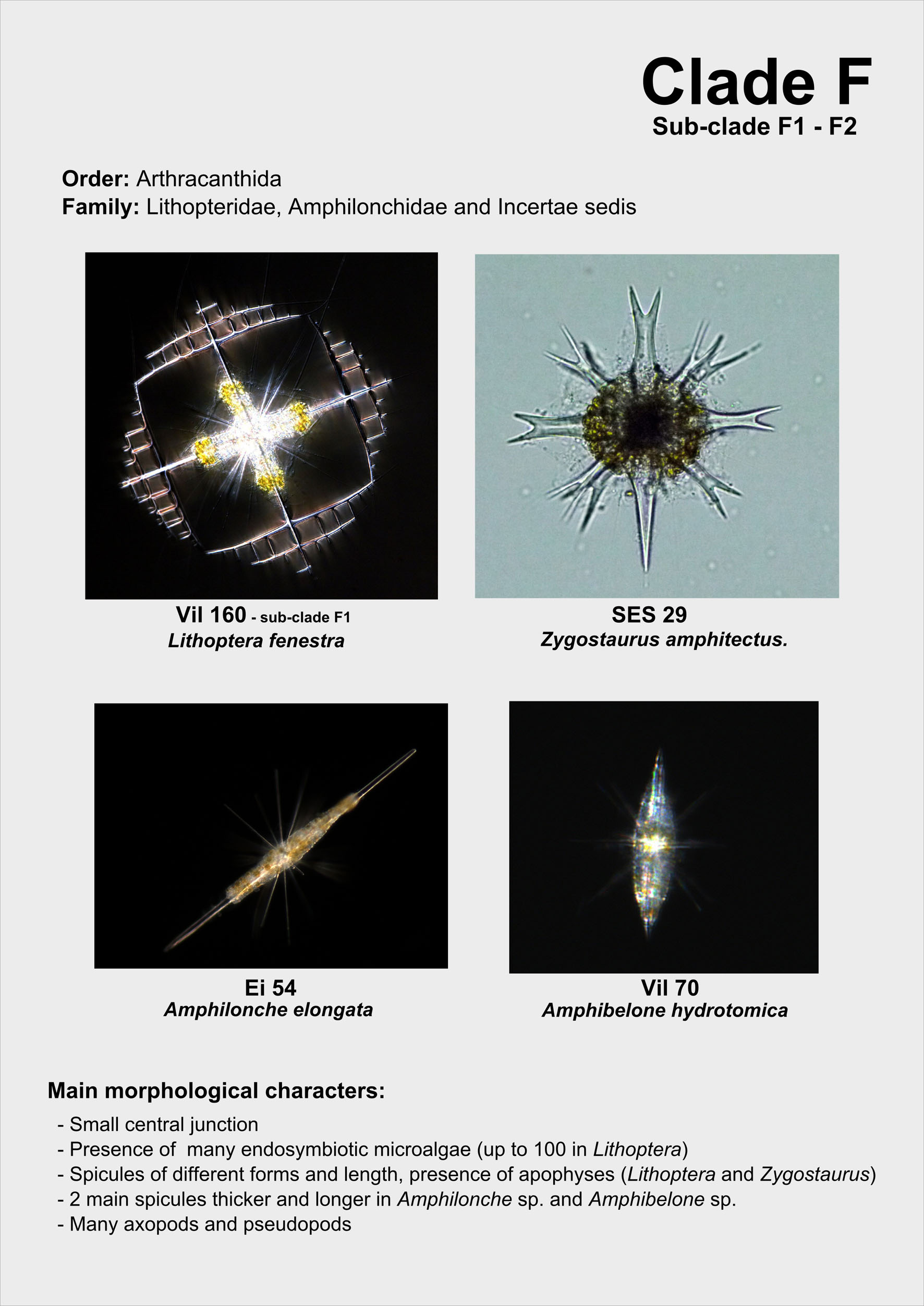 In surface waters, many acantharian species harbour symbiotic microalgae in their cytoplasm (golden cells on the pictures), representing about 80% of the acantharian biomass (Stoecker et al., 1996). These particular acantharians play a dual role in marine ecosystems: they are predators on a wide diversity of preys, from bacteria to zooplankton, but they also participate indirectly to primary production through their microalgal symbionts, sometimes significantly -up to 20% – in oligotrophic waters (Michaels, 1988). Taylor (1982) observed in the Sargasso Sea that most chlorophyll above the Deep Chlorophyll Maximum (DCM) could be represented by Acantharia, after the small microalgae (picoplankton) and filamentous cyanobacteria. Depending on the host species, Acantharia can have between 10 to 100 of microalgal cells. The number of these cells increases throughout the ontogeny of the Acantharia  (Michaels, 1991),  but we ignore whether they keep dividing in their host and/or they are continuously acquired from the environment.

In the 70’s, based on some  diagnostic criteria of the plast,  electronic microscopy observations of the microalgae in hospiteindicated that symbionts of Acantharia would be related to two main lineages, the haptophytes and dinoflagellates (Hollande et Carré, 1974; Febvre et Febvre-Chevalier, 1979). Haptophyte symbionts have been observed on only three acantharian species  (Lithoptera muelleri, Acanthometra pellucida et Amphilonche elongata) belonging to the order Arthracanthida et Symphiacanthida that contain more than 100 species. As for the dinoflagellates, the host species was not identified in the study.  But overall, the identity of the symbiotic microalgae remains unaccurate, and no genetic information is available  in order to have an identification at the genus or at the species level. Moreover, specificity and biogeography of the symbiotic relationship is poorly understood with only three host species sampled in a single location (Mediterranean Sea). We also ignore whether symbiosis occurred several times during the evolution of Acantharia. 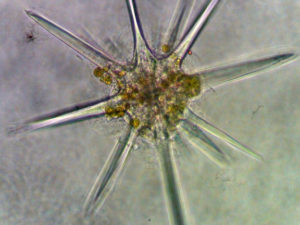 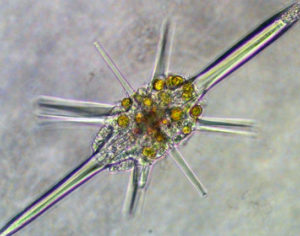 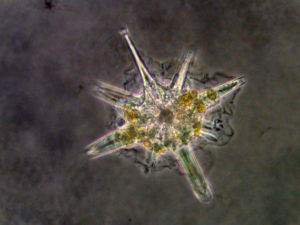 Related papers to symbiosis in Acantharia:

Acantharia are ubiquitary marine protists, particularly abundant in tropical and subtropical waters. Depending on the oceanic region, their abundance can vary between 1 to 40 cells per liter, and typically outnumber their close relatives, such as other Radiolaria and Foraminifera (Beers et al., 1975; Bottazzi, 1978; Michaels, 1988; Michaels et al., 1995).  Blooms of Acantharia have been observed and described in the Mediterranean and Sargasso Sea, where density can reach up to 500,000 individuals per m2 (Massera-Bottazzi et Andreoli, 1978, 1981; Febvre, 1990). Based on few studies, our knowledge about the geographic distribution of Acantharia is fragmented (See map below) and does not take into account the different taxonomic levels. 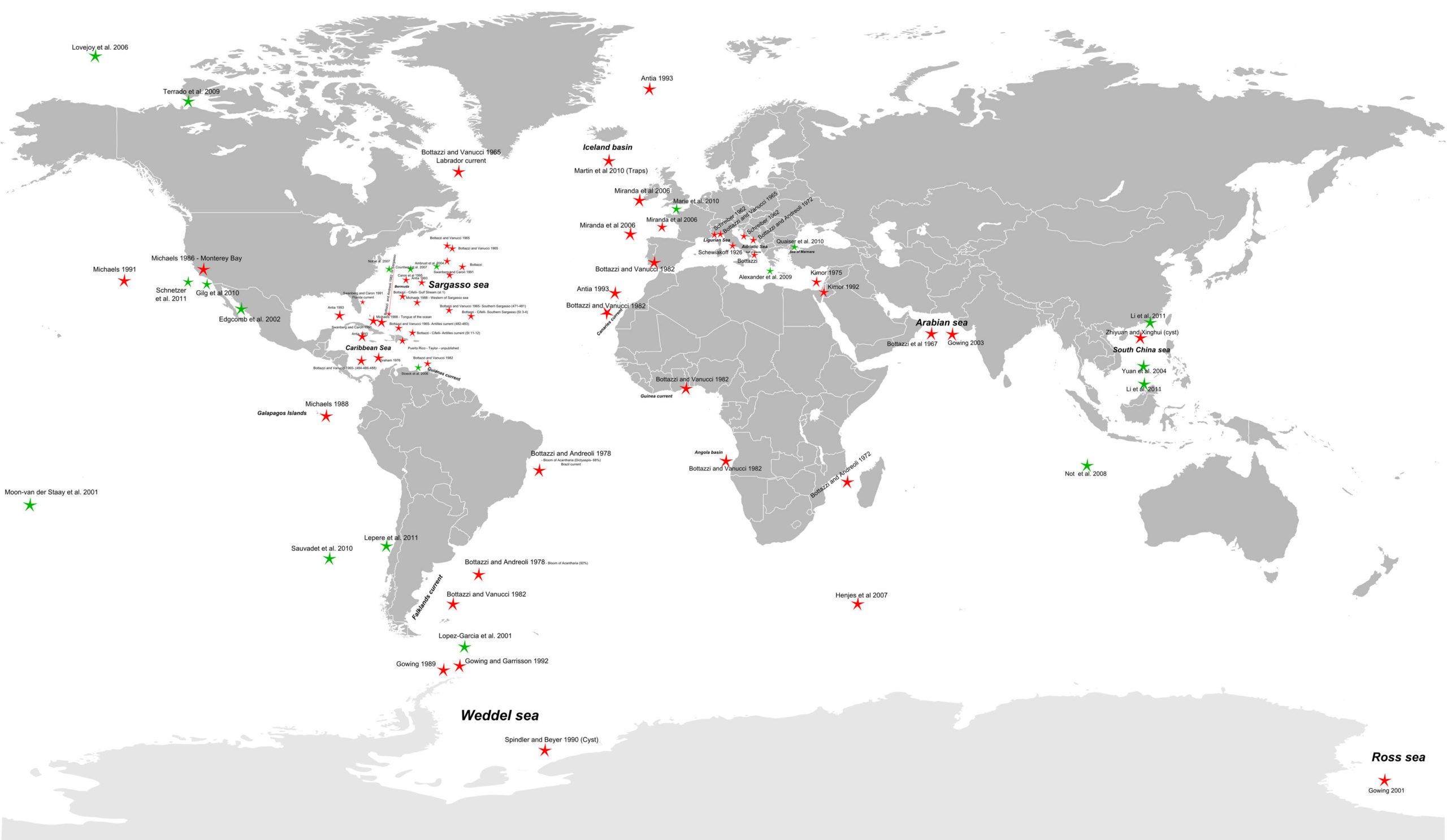 Nevertheless, Acantharia have been generally overlooked in many environmental surveys of plankton because of complete dissolution of the cell in classical fixatives (e.g. formaldehyde, Bernstein et Stewart, 1970).  In addition, these delicate organisms can be easily damaged or even destroyed during net tows.   These technical issues can explain the reason why the ecology and biogeography of Acantharia is still poorly known, despite their significant abundance in plankton communities.

We use cookies on our website to give you the most relevant experience by remembering your preferences and repeat visits. By clicking “Accept All”, you consent to the use of ALL the cookies. However, you may visit "Cookie Settings" to provide a controlled consent.
Cookie SettingsAccept All
Manage consent

This website uses cookies to improve your experience while you navigate through the website. Out of these, the cookies that are categorized as necessary are stored on your browser as they are essential for the working of basic functionalities of the website. We also use third-party cookies that help us analyze and understand how you use this website. These cookies will be stored in your browser only with your consent. You also have the option to opt-out of these cookies. But opting out of some of these cookies may affect your browsing experience.
Necessary Always Enabled
Necessary cookies are absolutely essential for the website to function properly. These cookies ensure basic functionalities and security features of the website, anonymously.
Functional
Functional cookies help to perform certain functionalities like sharing the content of the website on social media platforms, collect feedbacks, and other third-party features.
Performance
Performance cookies are used to understand and analyze the key performance indexes of the website which helps in delivering a better user experience for the visitors.
Analytics
Analytical cookies are used to understand how visitors interact with the website. These cookies help provide information on metrics the number of visitors, bounce rate, traffic source, etc.
Advertisement
Advertisement cookies are used to provide visitors with relevant ads and marketing campaigns. These cookies track visitors across websites and collect information to provide customized ads.
Others
Other uncategorized cookies are those that are being analyzed and have not been classified into a category as yet.
SAVE & ACCEPT